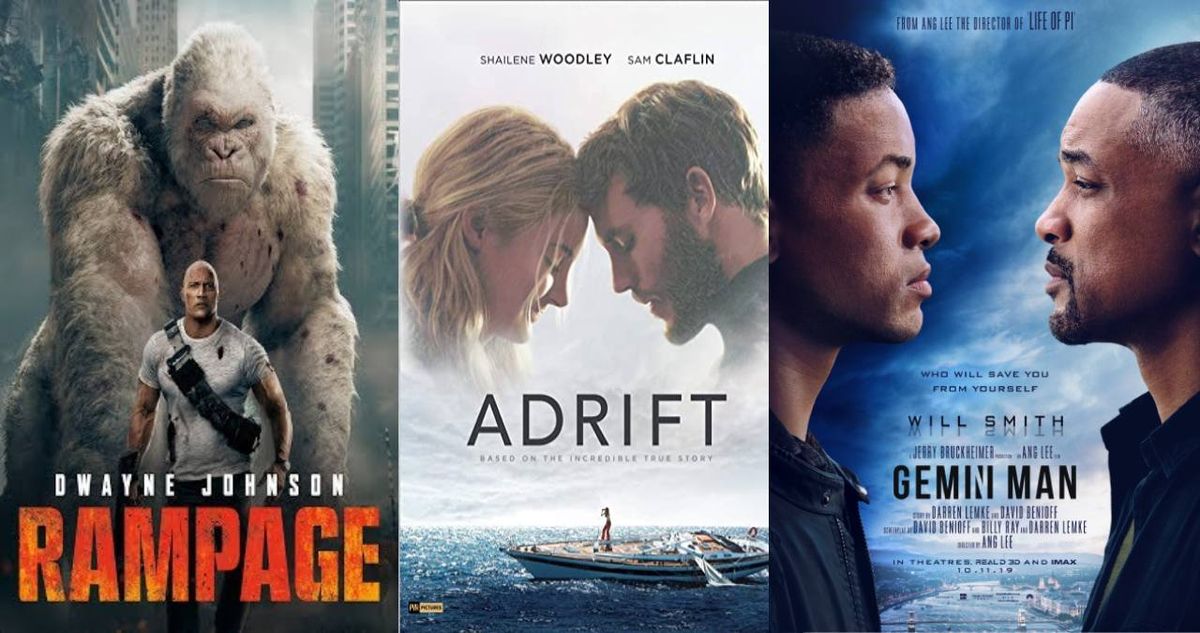 Mixture of romance and adventure, Adrift is a survival film that revolves around the catastrophic Hurricane Raymond in 1983. Based on a 2002 book written by Tami Oldham Ashcraft, this film will keep you glued to your seats and open doors for conversation. on the human desire and will to survive. Hollywood adventure films always make sure to balance the film in terms of adventure and emotion to keep their audiences sufficiently immersed for a wonderful viewing experience.

The best adventure movies on Amazon Prime India not only focus on the adventure factor but also play with the element of the mix of genres or bring out some unexpected emotions in the viewer. Dora and the Lost City of Gold is an extremely special film and created a buzz among kids of the 90s due to its adaptation of the popular Dora the Explorer series. A must have watch for all fans and a fantastic experience to choose from if you are new to it. Obstacles and solutions, this film has it all!

A gripping storyline with adventurous action sequences, Big Game is the best way to end a hectic work week. Watch a teenager in nature get involved in a life and death storyline, and there is no turning back. It’s one of the best adventure movies on Amazon Prime; with just the right amount of violence, acting and dialogue. Grab your popcorn and get ready for a night of wilderness, politics, guns, and strategies.

Guns, terrorists and war. The premise of the story concerns the civil war in Yemen in 2015. The Chinese navy patrol in action, fighting terrorism and trying to evacuate its fellows; Operation Red Sea is an intense vigil, and you may want to give yourself some time to process it. Like most adventure movies on Amazon Prime, this movie will have moments when you grit your teeth, and then a few moments when you want to cry. A good mix of emotions and action, choose to dive into history and live it.

A 2019 release, Gemini Man, has undergone a lot of work as it has been in the Hollywood adventure film industry for a long time. With different crews and multiple scripts, this featured Will Smith movie is directed by Ang Lee. The plot revolves around a retired hitman who finds himself chased by a clone of himself. A dramatic plot, an adventurous watch. Critics have said this film has wonderful visuals and solid performances, but only a satisfying plot. Give her a watch and find out for yourself!

If you haven’t heard of this movie yet, you’ve got a whole world of video games waiting for you. Assassin’s Creed is one of the most famous fantasy video games, and this movie is based on a similar premise. The video game industry was excited to see what the Hollywood adventure film industry had come up with. The film takes a step towards mythology as opposed to video games. Immerse yourself in the world of Assassins and escape reality today.

Based on the novel “The Mysterious Island” written by Jules Verne, this film is an action-packed comedy adventure. Dwayne Johnson stars alongside Vanessa Hudgens, Sir Michael Caine and many more, and makes this film an artist in its own right. Sean Anderson, a teenager played by Josh Hutcherson, goes on an adventure with his stepfather. They are in search of a mythical island, where Sean’s grandfather seems to have got lost. Overall, this is a great family adventure watch.

One of the best adventure movies on Amazon Prime, this one takes place at the turn of the 20th century and gives the viewer an experience of the era. From its strong visuals to well-defined characters, ‘The Extraordinary Adventures of AdÃ¨le Blanc-Sec’ tells the story of Adele and her journey through life. The nuances of this film are seen through the script and the emphasis on detail. Stories of her in situations with cops, boys and other obstacles, choose this to be your watch of the weekend.

A special film for all Potterheads, “Fantastic Beasts and Where to Find Them” is a prequel to the popular Harry Potter series. Everyone in their twenties is familiar with the series and grew up reading it. This movie is set in the late 1920s and revolves around magical beasts that have been unleashed in New York City. With the premise of a secret community of witches and wizards, it’s a magical adventure and a perfect place to start if you haven’t seen Harry Potter yet.

A return to the MonsterVerse adventure industry, Kong: Skull Island, follows other films like King Kong and Godzilla which feature a monster against humanity. In this film, a 100-foot monkey interrupts a fight between two pilots, which takes place at the scene of WWII in 1944. The island, somewhere in the Pacific, turns into a battlefield of war between monster and man. The atrocities involved are enormous and the strategies must be swift: who will survive?

There is a bit of everything here: action, fantasy and adventure. The Legend of Hercules is a film based on the mythological origin story of the Greek hero Hercules. Folklore goes that he was betrayed by his stepfather and exiled from his kingdom because he loved someone. The acting, music, visuals, and editing are absolutely thrilling and create a great atmosphere to hang onto. If you are into fantasy and the Greek gods, this is definitely the choice for you. Kellan Lutz plays Hercules and delivers a performance worth seeing.

Tarzan from the adventure novels written by Edgar Rice Burroughs, is hosted by David Yates in this film. The Legend of Tarzan is not, however, a direct adaptation of Burroughs’ work. The plot of the film is set in such a way that Tarzan has moved to London, but is asked to return to the jungle to help troubleshoot a mining site. Again, a tale that connects us to childhood that makes it one of the best adventure movies on Amazon prime India to watch and relax on a Friday night!

Another from the monster series, Rampage’s premise is that a science experiment goes awry and the animals are infected with a dangerous pathogen that causes them to destroy Chicago. A scientist and a team of geneticists unite to stop this catastrophe. Directed by Brad Pyton, it’s packed with action and sci-fi undertones. This film stars Dwayne Johnson as a US Army Special Forces soldier who works with the team to recover the monkey that was once his friend.

Among the best adventure movies on Amazon Prime, Immortals is one of those movies that consists of adventure, action, and a healthy dose of fantasy. The experience of watching such a movie lies in the visuals and its plot. This particular film revolves around a man “chosen” by Zeus to save all mankind. The film takes place in the background of Greece, where a king searches for a weapon to destroy humanity. With the weight of fighting this, an adventurous story emerges.

Despicable Me 2 is the equally entertaining comedic adventure sequel to the first film. This movie revolves around Gru keeping a balance between taking care of his daughters and being a lovable father, and being a league agent to fight bad guys. The film is lively, colorful, and is perfect for cheering you up. It is by far one of the best movies to watch as a bonus video. The minions add emotion and comedy to the film, as the plot progresses with Gru tackling one obstacle at a time.

If you’ve made it this far on the exclusive Amazon Prime adventure movie roster, you’re definitely not new here. We assure you that you don’t want to miss this one. Battleship is the perfect combination of adventure, action, sci-fi and military force. With an angry alien opposition force fighting the Navy, the plot becomes more gripping as their chances of survival diminish. Against all odds, this film stars the legendary Liam Neeson, alongside many other talented actors.

As the name suggests, ‘The Aeronauts’ is a biographical adventure film based on the struggle for survival between a gas balloon pilot and a scientist to make new discoveries about the weather. Amelia is a gas balloon pilot determined to succeed in this mission, and the visions of her late husband Pierre give the plot an eerie tone. A crowd cheers the launch of the gas balloon and thus begins the story of survival, curiosity and death.

A great cast, beautiful plot, and stunning visuals put together is what makes Oblivion what it is. Morgan Freeman and Tom Cruise put on a brilliant show, where every event in the story reveals something about the mission and is scary. Responsible for extracting the Earth’s resources, this film is a journey of self-discovery and turns into a fight to save humanity and its planet. A great watch for science fiction enthusiasts, and of course Tom Cruise never disappoints.

This movie understands the word “adventure” differently and revolves around the plot of doing something extremely scary and adventurous in life. Chef is a heartfelt, heart-warming film with comedy, drama, and an adventurous outlook on life. John Favreau co-produced, directed and starred in this film to tell the story of a chef who quits his job and starts his own food truck. The story is about balancing life, having dreams, struggling to make them come true, and understanding what support is. A great way to spend time with the kids and the family!

Sherlock Holmes is the ultimate mastermind we have all encountered. From his strong intuitions to the madness of the Mind Palace, he is triggered by a criminal on the run in Europe. Professor Moriarty is way ahead of Sherlock (or is he?). In an extremely captivating adventure to catch the criminal, there are strategies, obstacles and Sherlock’s need to solve the case. With Watson by his side, Sherlock is ready to take this case and solve it. We can’t say more, because it’s a spoiler-free area! This exclusive list of Amazon Prime adventure movies has been curated to get you started exploring the genre. There are several Hollywood and Hindi adventure films present on the platform. Immerse yourself in the adventure and explore like never before!

About me: Geek and nerd at heart, I love comics, horror movies and professional fighting. Yeah, I know how crazy that sounds.
Read more