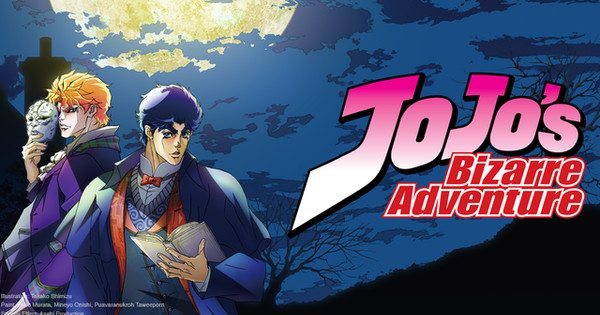 Media broadcasting service Crisp announced on Tuesday that it will be releasing the television anime from Hirohiko Araki‘s JoJo’s bizarre adventure manga. The service will announce more details at a later date.

Araki started his longtime action manga in Shueisha‘s Weekly Shonen Jump magazine in 1987. He then moved the manga in 2005 to Shueisha‘s Ultra jump magazine where it continues to this day, 110 volumes later.

Prior to current television anime projects, the manga inspired an original video animated series in the 1990s and a 2007 JoJo’s Bizarre Adventure: Phantom Blood movie. david production produced the 26-episode 2012-2013 television anime that covered both Part 1: Phantom Blood and Part 2: Battle Tendency of the original manga. JoJo’s Bizarre Adventure: Stardust Crusaders, the second story adaptation of Part 3 of the manga, will air on Japanese television on April 4.

Update: Crisp confirmed on Wednesday that it will air both the first season of the JoJo’s bizarre adventure animated and JoJo’s Bizarre Adventure: Stardust Crusaders. Both animated series will be available to all members outside of Japan on Friday, April 4 at 9:30 a.m. PDT, one hour after the Japanese premiere of Stardust Crusaders.

Even if Crisp‘s Facebook and forum announcements always say “ShÃ´nen jumpThe second longest running manga and popular anime is finally making its way outside of Japan and on your shores, â€the service makes no further mention of the manga.