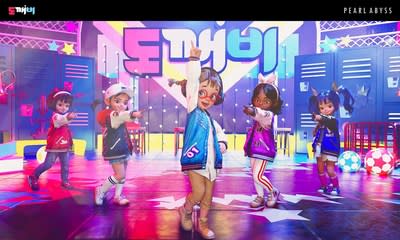 1 MILLION, the DokeV music video was specially created to thank the fans for their incredible support.

Seoul, South Korea, December 10, 2021 / PRNewswire / – Pearl Abyss has launched an all-new ROCK STAR music video at the Game Awards today presenting their latest IP, DokeV. The Game Awards, known as the OscarsÂ® for the video game industry, attracted over 83 million views last year. This year the event took place at the Microsoft Theater in Los Angeles and was broadcast live via 40 streaming services around the world.

The K-pop-inspired clip was specially created to thank fans for their unconditional support following the game’s announcement and the first gameplay video revealed at Europe biggest game show, Gamescom, earlier this year. DokeV captivated a global gaming audience with its vibrant and colorful open world, adorable character design, and unique gameplay elements, which were showcased in the original reveal.

The stars of the clip DokeVthe characters from while they play GALACTIKA * enticing ROCK STAR song with unique dance routines led by Lia kim from the famous dance studio, 1 MILLION. In the video, the main characters and their friends practice the choreography for ROCK STAR before ending up on the main stage in front of a large audience. 1 MILLION amazingly detailed choreography was captured at Pearl Abyss Motion capture studio and imported into the new generation BlackSpace Engine to create realistic animations. Finally, many scenes revealed in the DokeV music video will be available for actual gameplay.

â€œWe have produced a special video to reward the community for the overwhelming support we have received after revealing our first gameplay trailer,â€ said Sangyoung Kim, main producer of DokeV. â€œPearl Abyss is doing its best to create the DokeV world in a place that blurs the line between the virtual world and the real world. We are working hard to deliver a game that will meet the expectations of our fans. “

Pearl Abyss associated with the Korea Tourism Organization and many JC Brands to help promote the Hallyu wave (Korean wave) by showing a realistic virtual representation of Korea in DokeV, extending the scope of the game to include metaverse content. Traditional Korean heritage is also lovingly captured in the clip with actual references to Korean historical sites such as Geunjeongjeon Hall at Gyeongbokgung Palace, Gyeonghoeru Pavilion and Namdaemun; and traditional Korean children’s games and other traditional favorites.

Within the framework of the previously mentioned partnership with JC brands, the clip will also make an appearance at MOM ceremony, which is the world’s No.1 K-pop music awards ceremony featuring performers from all over the world. This is the first time that a video game music video will be featured on the show. MOM will be held on December 11 in Korea.

DokeV is a creature-collecting open-world action-adventure game with a unique setting where the main characters go on an adventure to meet and befriend Dokebi, legendary creatures from Korean folklore. The game will feature action-based elements, addicting gameplay and offer a high degree of freedom thanks to its beautiful open and transparent world. DokeV is under development for console and PC using Pearl Abyss’s The next generation Black space Motor.

DokeV is an open world creature collecting action-adventure game where players collect fanciful creatures called Dokebi. These legendary creatures from Korean mythology and folklore live in harmony with humans and help encourage dreams from which they gain strength. They represent all of the passions and worldly dreams of humans and can provide courage and strength to the humans they actively support. DokeV encourages an open play style and exploration and features a beautifully designed open world that is full of wonders and allows players to engage in a host of exciting activities with their collected Dokebi.

From Dil Bekaraar to Little Things, these 7 Hindi wellness shows of 2021 you should binge-watch

a quarantine musical collaboration with ‘Hundred Dollar Hoagie’ and…

The Spirit of the Grand Ole Opry Comes to Tucson | Music