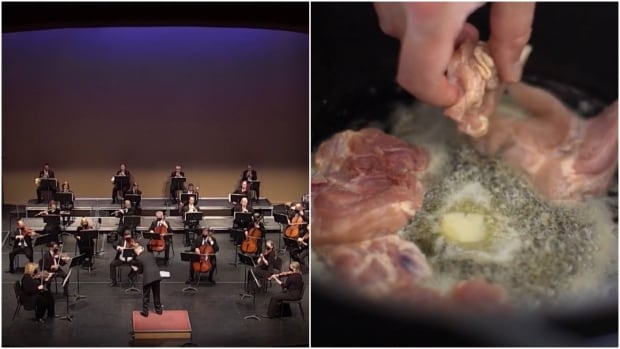 With live music events out of the question for the next step, the Windsor Symphony Orchestra is offering something a little different for people to enjoy from the comfort of their homes.

In a new series, Music. The story. The Food., The Windsor Symphony Orchestra wants people to immerse themselves in a musical adventure that ties music to a history and food from the era in which music was written or performed.

â€œEach of the concerts features music from a different culture and each features a recipe and a little videoâ€¦ on how to prepare food associated with the period or culture or inspiration for the music,â€ said Windsor Symphony Orchestra Music Director Robert Franz.

For example, Franz said that one of the musical pieces they perform is an opera from 1733 and that it was written in Naples.

WATCH: The orchestra trailer for the new series

The article is accompanied by a video and recipe from Rob Nelson, a local food historian and writer, on how to make pizza rustica – which Franz describes as “that big thick pizza pie she makes. about two or three inches thick, it doesn’t have tomato sauce but it has meats and cheeses and it’s amazing. “

He said people can follow at home, listen to music and prepare food.

But, if they’d rather not cook, Franz said they’ve partnered up with seven local restaurants, so for this one, people could just order pizza from Nico Taverna.

If they had performed live, Franz said he would have loved to have a chef prepare the food so that guests could smell the dishes while the music played.

The seven-part series will be released on the symphony’s website on January 14. People will need to purchase tickets and then be able to access the entire series until March 31.

How does a symphony orchestra behave in a moment like this? Let’s say it takes some ingenuity. Windsor Symphony Music Director Robert Franz explains. 6:51

Longford music fans gear up for the Forever Young Festival: where the 80s come to…